The Delta-8 Debate: Legal or Illegal, Naturally-Occurring or Synthetically-Derived?

Delta-8 THC arrived on the scene as the hot new star and caused a big debate about its legality. Delta-8 can be extracted from hemp or marijuana, and it can also be converted from CBD to D8 THC.  The most common way to mass-produce delta-8 THC is through a very safe, and simple, process that converts CBD to Delta-8 THC.

This conversion process has caused some confusion regarding Delta-8’s legal status.

There’s a statute banning “synthetically derived cannabinoids.” And some people argue that since it’s been through a process, it is now synthetic.  However, delta-8, when in the live plant, is the same exact delta-8 that’s in the finished product. So, there’s nothing synthetic about it.

It’s simply a naturally occurring, hemp-derived Phytocannabinoid and in most states, totally legal.  When reading statutes, one must also consider their intent.  Was it to ban something similar to marijuana or, was it to ban something much, much worse like real Synthetically Derived Cannabinoids such as K2 or Spice?

The debate about Delta-8’s legal status involves two variables:  (#2 is mostly where the confusion comes from)

Delta-8 is one of over 100 phytocannabinoids, or “plant” cannabinoids, found in Cannabis.  The 2018 farm bill divided cannabis into two different categories: Hemp and Marijuana.  It defined hemp as having less than 0.3% Delta-9 THC and any cannabis plant with more than 0.3% Delta-9 THC is considered marijuana.  Hemp usually has a high % of CBD (around 10%) and always <0.3 Delta-9 THC).  Marijuana usually has the opposite: 10-20% Delta-9 THC and a very small amount of CBD.  Both plants have very small amounts of Delta-8 THC.

Given the fact that you can find Delta-8 in both Hemp and Marijuana, states where marijuana is banned/illegal such as Kentucky have to make that distinction.  In Kentucky, Delta-8 from Hemp is Legal, any cannabinoid including delta-8 from marijuana is illegal.  That same distinction means that CBD from a Marijuana plant (even if it has absolutely zero THC of any kind – D8, D9, D10) is also illegal.

As a Florida licensed Hemp infused food manufacturer, Hemp Lively only deals with Hemp-Derived cannabinoids such as CBD and Delta-8 THC.  All of our products always stay below the 0.3% Delta-9 THC compliance threshold.

Delta-8 hit the market like a tsunami.  Most shops doubled or tripled their income overnight with the addition of delta-8 THC products, especially in states where marijuana is still regulated.

A good example is a diamond made in a lab.  There’s absolutely no difference in composition between the natural diamond molecularly except the diamond that took thousands of years to make has some impurities in it.  But the diamond part is identical in chemical composition.

Yes, some Hemp-derived delta-8 was made in a lab from a hemp-derived CBD predominant extract that’s been converted to Delta 8. Which was already in the extract it started with and is naturally occurring in the plant.  Just because something goes through a process, doesn’t mean it’s now synthetic.   If that were the case, all CBD products would fall under “synthetically derived” because there are numerous processes that happen during extraction and even when manufacturing gummies.

If you took hydrogen and oxygen and, in a laboratory, made Water.  Would you consider that synthetically derived water or just water?

Are All Synthetically Derived Cannabinoids Bad?

Many synthetic cannabinoids have been found extremely useful because they bind selectively to either the CB1 OR the CB2 receptor, unlike THC who has an affinity for both.  Tritium-labeled cannabinoids like CP-55,940 for example played a vital role in discovering the cannabinoid receptors in the early 1990s. So, believe it or not, we may not have discovered the Endocannabinoid receptors without them.

Early synthetic cannabinoids were also used medicinally. Since 1981, Nabilone, a 1st-gen synthetic THC analog, was used as an antiemetic to counteract vomiting and nausea.  Synthetic THC’s such as Marinol and dronabinol, have also been used as both an appetite stimulant and an antiemetic since around 1985.

Then someone figured out these chemicals get you really, really high.

Around 2005, several unethical entrepreneurs began spraying these chemicals on a smokable flower-like substance.  Marketed as synthetic marijuana, recreational synthetic cannabinoid drug use because extremely widespread in the USA.  These products were inexpensive to produce and became popular with users because, at that time, they did not show up on a drug test.

The legal loophole at that time was the fact that most synthetic cannabinoid’s molecular structures differed from Delta-9 THC and other illegal cannabinoids.  Yes, that’s right.  Synthetic cannabinoids were not technically illegal but harmless marijuana was.   Chemically most of these “synthetically derived cannabinoids” aren’t even similar to any cannabinoid, they just are sold to mimic the effects of marijuana. And for anyone who’s ever smoked marijuana or eaten an edible, K2 and Spice are NOTHING LIKE marijuana. NOTHING. 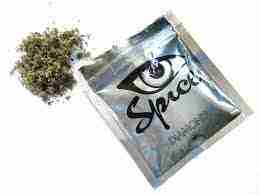 Several years ago, you could walk into any gas station or smoke shop and buy Synthetic cannabinoid products.  They looked like fake weed. Actually, it looked more like really bad pot.  They were sold as “incense” or “potpourri” and had some common Brand Names such as “K2” or “Spice”.  These products are made by taking a liquid CHEMICAL SUBSTANCE and spraying it on a smokable leaf-like material.  For those that read this and have never heard of K2 or Spice before, it tore neighborhoods apart and the government was right in banning it.

Here’s what happens when you smoke K2 or Spice

A 6-foot tall, 250lb grown man, can take a few flakes of Spice or K2, no bigger than the size of a half of a grain of rice, mix it with some tobacco, smoke it, and about 30 seconds later you will most likely hear him hit the floor.  By the time you turn around to figure out what caused that thump, the person who smoked the K2 or Spice has defecated themselves, thrown up, may be bleeding from the fall, and about half the time, start to convulse.  Bad stuff.

Delta-8 does have therapeutic effects.  It also, like many things, can be used recreationally, which in turn is another form of therapy.  People all across the USA love Delta-8 and most prefer it over Delta-9 THC because it’s less potent and not as “heavy” a high.  Several people have told us they use it to help sleep or they feel less stressed when they take it.  Others say they just like to unwind after a hard day’s work.

Whatever the reason you’ve considered taking a D8 THC product, please remember that it can be psychoactive and can cause drowsiness.  Definitely do not operate heavy machinery while on it and, like anything else you take, start slow and be responsible.  And don’t worry, there are only a few states that have specifically stated that Delta 8 is banned, including but not limited to, Arkansas, Idaho, and Utah.

If you have any questions regarding a specific state, we’ll be posting an updated legal status by the state in the next few weeks, or you can always call us at 850-299-9624 or e-mail us at [email protected]